An inoculation of musical cheer

David Halls is director of music at Salisbury Cathedral, one of the most imposing church buildings in the country. But on Wednesday, March 9 he will be performing in Rickmansworth’s rather more modest Baptist church.

Early last year, when the 800-year-old cathedral was transformed into a giant vaccination centre, David and a colleague soothed the nerves of people queuing for their jabs by playing organ music by Bach and Handel – and even a little Rodgers and Hammerstein. Their much-appreciated performances attracted international media attention as it was one of the few cheerful news stories at that stage of the pandemic.

One year on, David is coming to Rickmansworth to take part in the latest in a series of concerts that Three Rivers Music Society is staging to tempt classical music lovers back to live events.

David, an accomplished pianist, will be performing with his cellist brother, Steven, and violinist Daphne Moody. Steven Halls, who was the long-time chair of the national Elgar Society, also happens to be the retired chief executive of Three Rivers District Council. Daphne Moody is a sought-after orchestral leader and chamber music player who has played with the Bournemouth Symphony Orchestra and the London Festival and Halle orchestras.

The trio will be performing music by Antonio Vivaldi, Antonin Dvořák and Frank Bridge, who was Benjamin Britten’s teacher.

The concert will be held in the Baptist Church, High Street, Rickmansworth WD3 1EH. It will begin at 3pm (pre-concert talk from 2.45pm). Tickets £16 at the door. Reduced price for members. Free entry for under-25s.

By Michael Stimpson, 4 months26th February 2022 ago

By Michael Stimpson, 2 years22nd November 2020 ago 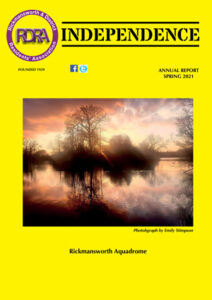